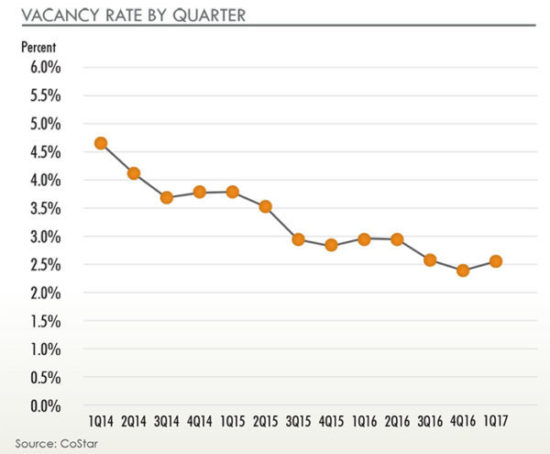 Demand Slows In Q1 But Rents Still Are Soaring

Net absorption stumbled in the first quarter, posting its biggest three-month loss in seven years. But vacancy rates remained in record-low territory with the market’s momentum reflected in skyrocketing rents that have jumped an average of 16 percent in the last eight quarters.

More than 682,036 sq. ft. of space came back on the market in the first quarter, most of which was in the Airport submarket. The decline follows a strong close to 2016 that included the shock of the general election.

North County, which includes Anaheim and roughly half of the county’s total inventory, was the only submarket to tighten in the first quarter. That was, in part, because one building was removed from its 117-million-square-foot inventory. The North County vacancy rate is 2.2 percent, 0.4 percent less than the countywide average.

There are a dozen speculative buildings underway in cities of Fullerton, Anaheim and Brea. Even though they will add about 2.5 million sq. ft. to the industrial inventory, they fall short of replacing the 95 buildings totaling 4.7 million sq. ft. that were razed in the last eight years and replaced largely with multifamily and retail construction. Although the inventory reduction is small, only 1.6 percent, it looms larger because there are no substantial development opportunities on the horizon.

More than 406,000 sq. ft. of space returned to inventory in Q1 in the Irvine Business Complex, which pushed up the vacancy rate 50 basis points to 3.5 percent in the Airport submarket.

The South County and West County submarkets also showed slight increases in their vacancy rates but available space remains tight. Average asking rents in South County – from Irvine Spectrum to San Clemente – rose 9.5 percent year over year and are the highest in the county. In West County, which includes Cypress, Huntington Beach, Los Alamitos, Stanton, Seal Beach and Westminster, there has been less upward pressure on rents so far but with a vacancy rate of 1.3 percent some acceleration can be expected.

The shortage in space also is forcing company executives seeking to expand to add many months or longer for their site search and to prepare for costly demands from landlords.