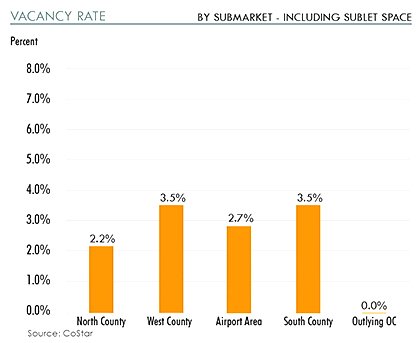 Except For Lease Rates It’s A Game Of Dwindling Numbers

Continued strong demand for industrial space has reduced the already low inventory of
vacant property by 25% over the last four quarters.

Orange County’s industrial market has been among the nation’s tightest before and since
the recession. Average asking rents jumped 12% year-over-year for the largest annual
gain since 2010 and rent increases in some renewals are topping 50%. But for most
companies the big issue is availability and a dwindling number of choices. Statistically,
98 of every 100 Orange County buildings are occupied.