Q1 2017 ended with nearly 13 million square feet under construction. Lehigh Valley remained a leader in driving construction activity, leading the market in both the number of projects and total square footage. With 4.5 million square feet being constructed in seven on-going projects, six which are speculative starts, this spec construction activity will help refuel the submarket inventory that experienced a record breaking 2016. The first of these new deliveries are scheduled for the middle of Q2, but this availability could be short lived, as at least one of those expected deliveries has already been preleased. 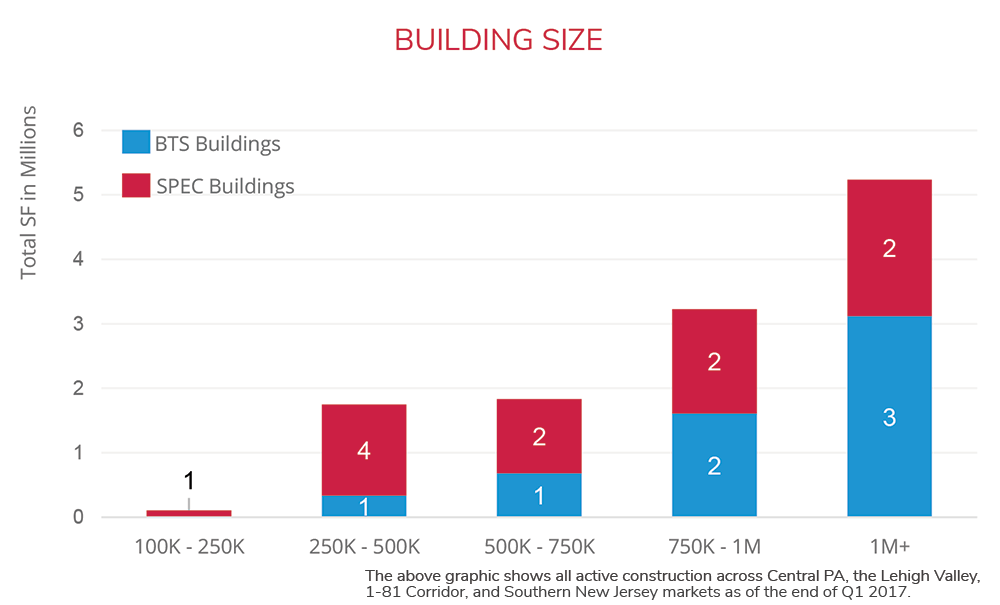 Central Pennsylvania was the most active submarket for construction activity at the end of Q4 2016, and by the end of Q1, the market had added an additional 2 million square feet of speculative space to its inventory. 80% of the total space delivered was in Harrisburg West (Cumberland and Franklin Counties), raising the vacancy rate in this submarket by 116 bps. Only 2.8 million square feet remains under construction as of the end of Q1, 1.8 million of which is being built in tertiary submarkets, and only 780,000 of which is speculative. This 780,000 square feet under construction in York, is one of two current construction projects underway in Central PA that have been granted a LERTA designation. The other is a BTS project for Mattel in Lebanon County, near the I-81/I-78 split on the far eastern portion of the Harrisburg East submarket.

The LERTA (Local Economic Revitalization Tax Assistance) program is a Pennsylvania economic incentive that provides tax exemptions on land improvements. The program can be approved by the county, local municipality and/or by the local school district. The incentive can be up to ten years, and most often the program gradually increases taxes on improvements by 10% annually. However, in some markets, like the I-81 corridor, the LERTA incentive may not gradually increase, but instead exempts taxes for the entire 10 year term. Nonetheless, LERTA designation is a considerable factor in attracting tenants in major submarkets within Central PA and the Lehigh Valley, but it has proven to be absolutely vital for projects located for secondary and tertiary submarkets. At the end of Q1, four of the five LERTA approved projects under construction remained available for lease. Only one existing LERTA approved property remained available for lease at the end of Q1. Only one of these five available LERTA properties reside in a primary market.

Two developers making use of economic incentives are Mericle and NorthPoint, who collectively are behind 83% of the square feet under construction in the I-81 Corridor at the end of Q1. Mericle has effectively used their 10 year, 100% tax abatement LERTA designation to continually attract prospective tenants to their projects in their CenterPoint parks.  Northpoint made use of its LERTA designation at 25 Keystone Blvd., as that project based in NEPA South (Schuylkill County) which began construction in Q1 2016, is now fully leased at the end of Q1 2017. NorthPoint is currently developing the Hanover Ridge Trade Center in Wilkes-Barre, PA which is located in a KOZ. Different than the LERTA program, the PA Keystone Opportunity Zone (KOZ), is designated geographic areas that can provide residents, tenants, or landlords with specific state and local tax benefits. NorthPoint has already found one suitor for their three building project, as Chewy.com has committed to an 800,000+ square foot BTS in the park.