By: Andrew Wagaman Of The Morning Call
Twitter @andrewwagaman

Real estate investment companies based in Baltimore and Boston are teaming up to build an industrial park along Route 309 just north of Quakertown.

A joint venture between MRP Industrial of Baltimore and Cabot Properties of Boston will break ground this summer on two buildings totaling more than 260,000 square feet on West Pumping Station Road in Richland Township, Bucks County.

According to a news release, both buildings will feature 32-foot clear ceiling heights, two drive-in doors and the option to integrate a high percentage of commercial office.

Michael McCarthy, Cabot’s vice president of investments, said the Lehigh Valley and suburban Philadelphia regions continue to fit the profile of attractive industrial development markets because of the “voracious demand for high-quality warehouse and industrial product fueled by the rapid acceleration of the e-commerce industry.”

“Our team designed two highly flexible buildings that can satisfy the specific real estate needs of a wide range of end-users including companies involved with logistics, manufacturing operations and warehousing,” she said in a statement. “The Lehigh Valley region, in particular, remains extremely vibrant given its strategic positioning within one day’s drive to one-third of all consumers residing in the United States.”

The Lehigh Valley had more than 116 million square feet of industrial building inventory entering 2018, 20 million of which was built in the past five years, according to the Lehigh Valley Economic Development Corp. 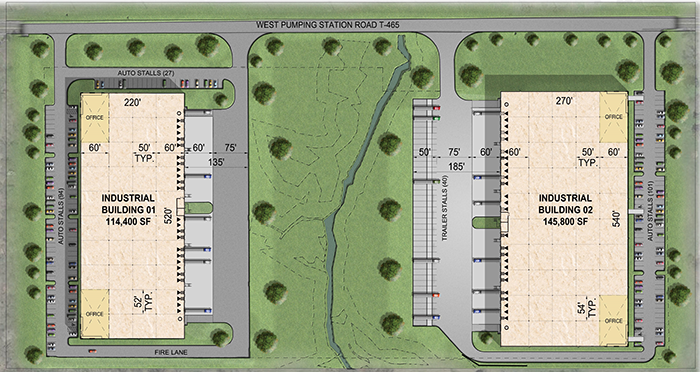