In June and July of this year, the Fed raised the interest rate at the fastest pace in forty years: it raised the federal funds rate 75 basis points at each open market committee meetings. Why did it do so, and what do its actions and current economic data say about the economy? This report will investigate and answer these questions, as well as explore the thinking that is guiding the Fed’s policies and explain the implications of these policies for commercial real estate.

INFLATION AND THE ECONOMY

WHAT IS THE FEDERAL FUNDS RATE AND WHAT DID THE FED DO WITH IT IN JUNE AND JULY OF 2022?
The federal funds rate, or fed funds rate, is the rate at which banks1 lend money to each other. By law, banks are required to keep a portion of their customer’s deposits on reserve. To meet this reserve requirement, banks often lend money to each other on a nightly basis. The interest rate banks charge each other when making these loans is the Fed funds rate.

By raising or decreasing the fed funds rate, the Federal Reserve is able to control the supply of available funds, other interest rates (e.g., credit card rates, auto loan rates, mortgage rates, etc.), and, indirectly, inflation. By raising the fed funds rate, borrowing becomes more expensive and that causes the supply of available money to decline, which increases the short-term interest rates and helps keep inflation in check. Lowering the rate has the opposite effect, bringing short-term interest rates down.

WHY DID THE FED RAISE THE FED FUNDS RATE BY SO MUCH IN JUNE AND JULY?
The Fed raised the fed funds rate by so much to control the rising pace of inflation. The Fed uses a variety of measurements to gauge inflation, and as of July, every measure the Fed uses indicated that inflation had risen by an intolerably high rate. For example, year-over-year, inflation rose 9.1% using the consumer price index (CPI) measurement of inflation and it rose by 6.8% using the personal consumption expenditure (PCE) measurement of inflation. Even when you remove goods with prices that quickly fluctuate, such as food and energy, from the calculation, also known as core-PCE, inflation has gone up 4.8% year-over-year. You have to go back to 1982 to see yearly increases in inflation this high. By any of these measures, inflation is growing too fast. 2

By law, the Fed is required to pursue policies to achieve maximal sustainable employment and price stability. Accordingly, the Fed has stated that it will increase rates until it sees clear signs that inflation is close to rising only at 2% per year.

WHAT DOES CURRENT ECONOMIC DATA SAY ABOUT THE STATE OF THE ECONOMY?

Right now, economic data is giving mixed signals about the state of the economy. On the one hand, our latest measure of GDP indicates that in both Q1 and Q2 GDP declined. As a rule of thumb, two-quarters of negative GDP implies that the economy is in a recession. Yet, on the other hand, other indicators suggest that the economy is growing. In the first six months of this year, the economy created 2.7 million jobs. That’s an average of 450,000 jobs per month. For perspective, from Q4 2010 to February 2020, even when the economy was growing, the US economy added only an average of 195,000 jobs per month. The best month of job creation on record within those ten years was in February 2018 when 402,000 jobs were added. The unemployment rate is currently 3.5%, the lowest on record. The current underemployment3rate is 6.7%, the lowest on record since 1969. Even when adjusted for inflation, core retail sales4 is up 3.6%, suggesting that consumers are not withdrawing from economic activity. Both manufacturing and non-manufacturing sectors of the economy are growing, as measured by the ISM Manufacturing index5. In terms of prices, food prices, gas prices, and commodity prices are going down – not as fast as one would like, but they are going down.

WHAT DOES THE MIXED ECONOMIC DATA IMPLY FOR FUTURE FED POLICY REGARDING RATES?

Because our measures of GDP indicated that it declined for two quarters, many commentators were under the impression that the Fed was either not going to increase rates or slow the pace of increases. However, the data regarding job numbers and the unemployment rate undermined that expectation. As noted above, the Fed is committed to raising interest rates until it sees clear signs that inflation is close to rising only at 2% per year. Going forward, the Fed’s rate increases may not be as high as the 75 basis point increases of the last two meetings, but expect rate increases by at least 50 basis points until the inflation rate declines. The Fed is insistent on pursuing this path not only because of its mandate but also because it wants to ensure that long-term inflation expectations remain “anchored” so that there are no signs of a 1970s-style wage-price spiral. Currently, the Fed has kept consumer and investor expectations about inflation in check. According to a recent Federal Reserve Bank of New York survey, consumers expect less inflation in the coming years6. Similarly, financial markets are also expecting diminished inflation going forward. The 10-year breakeven rate, a market measure of expected inflation, is at 2.48%7, and as of the end of July, the expected rate of price increase over the next year implied by inflation swap markets has plunged from 5 percent to 2.45 percent8. The next meeting in which the Fed is expected to act is September 21.

GIVEN FUTURE INCREASES BY THE FED AND CURRENT INFLATIONARY CONDITIONS, WHAT IMPLICATIONS DOES THIS HAVE ON COMMERCIAL REAL ESTATE?
Because commercial real estate is typically viewed as a less volatile asset class, expect capital to move into the sector. Compared to other investment classes, Inflation resistant commercial property types such as hotels, multifamily, self-storage, etc. remain in favor by capital markets.

Capital markets are also seeking out commercial property types such as industrial and retail which have a built-in rent escalator, or the in-place leases are set to expire in the near future.

Lastly, expect capital to move from markets most in demand during to the pandemic to higher yield secondary and tertiary markets. Consequently, expect intense competition for assets in the Midwest, small cities, and the Sunbelt.

The information and details contained herein have been obtained from third-party sources believed to be reliable, however, Lee & Associates has not independently verified its accuracy. Lee & Associates makes no representations, guarantees, or express or implied warranties of any kind regarding the accuracy or completeness of the information and details provided herein, including but not limited to, the implied warranty of suitability and fitness for a particular purpose. Interested parties should perform their own due diligence regarding the accuracy of the information. The information provided herein, including any sale or lease terms, is being provided subject to errors, omissions, changes of price or conditions, prior sale or lease, and withdrawal without notice. Third-party data sources: The sources listed above, CoStar Group, Inc., and Lee & Associates proprietary data. © Copyright 2022 Lee & Associates all rights reserved. 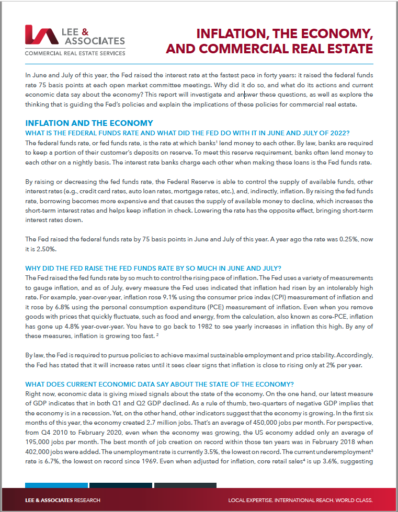