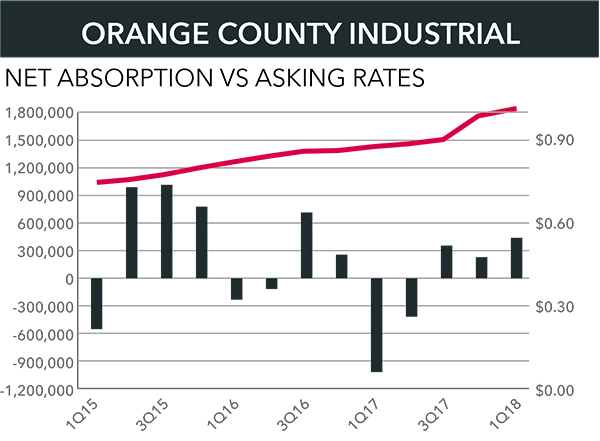 With the countywide average vacancy rate falling to 2.4% in the first quarter, available industrial space has never been in shorter supply. In the North County market, the first-quarter vacancy rate fell to 1.5%.

Of the county’s 8,310 industrial buildings totaling 276.9 million sq. ft., about 200 are vacant and an additional 250 are listed as available. Few buildings offer well-located, quality options for growth-minded companies. Much of the available space is functionally obsolete and unsuitable for most users.

Countywide net absorption was mixed, totaling 407,615 sq. ft. in the first quarter. It was the third straight quarterly improvement, driven largely by strong demand across eight cities in north Orange County. On the other side of the ledger is the 73.2 million sq. ft. Airport market – the county’s second largest—where tenants have shed nearly 1.3 million sq. ft. since 2016.

Since virtually no land is available anywhere in the county for development other than a handful of scattered infill sites, the prospect of any significant future new supply is effectively off the table. The county’s industrial inventory is substantially unchanged since 2010 as the number of new buildings is essentially equal to the number razed for residential and retail development.

West County’s asking rents jumped 12.3% year over year after gaining less than 20% over the prior 16 quarters. With 44,737,727 sq. ft., Q1’s 2.9% vacancy rate was unchanged from year-end 2017 but up 0.9% year over year across West County’s cities of Cypress, Huntington Beach, Westminster, Stanton, Los Alamitos and Seal Beach.