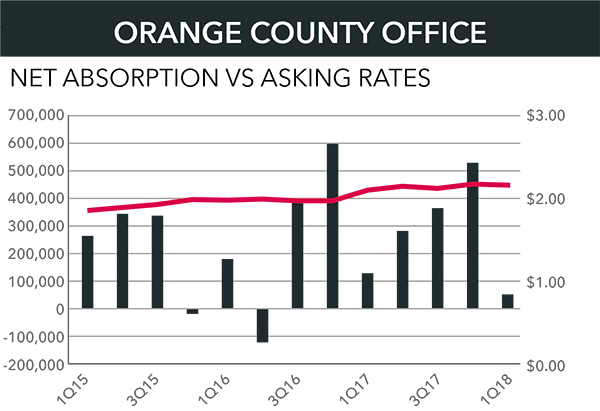 Demand for office space countywide posted its third straight quarterly gain but leasing activity has been uneven, ranging from strong expansion in South County to weakness in the large Airport office market, where net absorption has been negative for five of the last six quarters.

Rent increases also have been mixed as asking rates for Class B space, which accounts for slightly more than half the county inventory, were up 12.6% year-over-year through the first quarter. Rent growth for premium space, however, managed 4.3% for the same period.

Although the 25.5 million sq. ft. South County inventory accounts for 22% of total county base, since 2016 it has been the hot market, particularly in and around the Irvine Spectrum. Seventy-two percent of space leased countywide has been in South County in the last nine quarters, but new supply has stayed ahead of demand. Since 2016, 12 buildings totaling 2.5 million sq. ft. have been delivered. During the same period, tenant expansion has totaled more than 1.8 million sq. ft. with 496,398 sq. ft. of space coming off the market in Q1.

Meanwhile, fortunes have turned for owners of some buildings in the Airport market, which represents 38% of the county’s total. Following the crash, the 43.4 million sq. ft. Airport market staged a steady recovery with nearly 5 million sq. ft. of space absorbed from 2010 through 2015. Since then, demand has softened and more than 780,000 sq. ft. has come available. First-quarter absorption finished in the red by 253,297 sq. ft. Some landlords are offering leasing bonuses to procuring brokers – enticements usually deployed during downturns. The Boardwalk, an Airport-close 545,000 sq. ft. project on Jamboree Road Irvine, opened in Q1 with signed and pending tenants for 40% of its space, says developer Trammel Crow.

Throughout the county, landlords are reacting to tenant demand for creative space. The nationwide trend is a requirement companies increasingly say is needed to attract and retain workers. Private offices, cube farms and ranks of lateral file cabinets are giving way to hot desks. It’s an unwelcome reality for many building owners to stay competitive. In addition to the cost of a makeover, the modern office with an array of common-area amenities can efficiently support a 30% larger workforce in the same space.