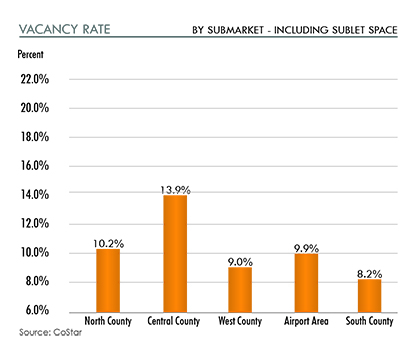 Strong demand for Orange County office space continued in the third quarter as the vacancy rate settled at 10.3%. There was positive net absorption across all five of the county’s submarkets.

The rate of absorption could be healthier for much of the highly touted “creative space,” featuring open floorplans and highly designed common areas aimed at companies with younger workforces. In the last two years developers have spent millions of dollars to enhance more than 1 million sq. ft. of existing buildings in hopes of commanding premium rents. But of the largest projects only one, The Habitat in Irvine by Bixby Land Company, is leased up. Bixby signed Karma Automotive for the 242,462 sq. ft. project in August.