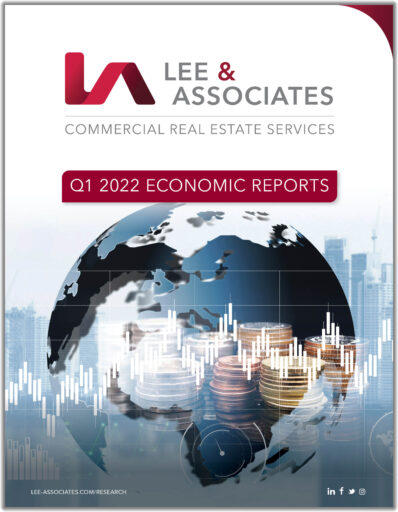 GDP GROWTH
The U.S. gross domestic product contracted at a 1.4% annual rate in the first quarter. It was the weakest quarterly showing in the nation’s economy since 2020 and was blamed chiefly on supply disruptions, reduced exports and fading fiscal stimulus. But solid consumer spending and business investment suggest that growth will resume. Nevertheless, the decline was unexpected and in stark contrast to the strong 6.9% GDP reading in the fourth quarter of 2021. Despite the retreat, the Commerce Department said consumer spending – the main driver of the economy – rose at a 2.7% annual rate, which was a 20-basis point improvement on Q4. It should be noted that the jump in consumer spending came amid a 7.8% rise in prices. READ MORE>

EMPLOYMENT
The U.S. unemployment rate at the end of March fell to 3.6%, down 30 basis points since the end of 2021, and closed out the first quarter nearly matching the lowest jobless rate since 1969. Additionally, the number of long-term unemployed declined by 274,000 in March to 1.4 million, the Labor Department said.

There were 431,000 new jobs added in March with notable employment gains in leisure and hospitality, professional and business services, retail trade and manufacturing. In the first quarter, monthly job gains averaged 562,000, virtually the same pace as average monthly job creation in 2021. The U.S. Bureau of Labor Statistics reported that 10% of all workers worked remotely because of the pandemic. That rate decreased from 13% in February. Additionally, among those not in the labor force 874,000 persons were prevented from looking for work due to the pandemic, down from 1.2 million the previous month. READ MORE>

MONETARY POLICY
The Federal Reserve raised interest rates twice so far this year – a quarter percentage point in March and a half percentage point in early May – making good on its pledge to move aggressively to curb rising inflation now at a 40-year high. The two increases lifted the benchmark short-term borrowing rate from near zero, and officials at the central bank said they expect rates to climb nearly 2% on average this year and 3% in 2023. The Federal Reserve also said that in the second quarter it would begin unloading some of the $4.5 trillion in assets it purchased during the pandemic. It is a three-year plan with a goal of shedding $95 billion a month in mortgage-backed securities and treasuries. READ MORE>

GLOBAL ECONOMY
Russia’s unprovoked war on Ukraine has added pronounced stress to economies worldwide that already were grappling with inflation and the lingering effects of Covid.

The IMF now expects global prices to increase 7.4% this year, more than double the 3.2% it forecast in late 2020. The increases will be notable throughout commodity markets, trade and financial channels, the fund said, and will complicate the balance sought by central banks aimed at safeguarding growth. READ MORE>