Data centers are handsomely rewarding investors for their confidence in the sector. As of Q4 2020, data center REITs yielded 17.2% in returns, beating out all other CRE asset classes’ REITs by a wide margin. During the same period, infrastructure REITs produced 10.2% returns, followed by industrial (9.8%), self-storage (8.2%), healthcare (-13.9%), office (-19.9%), lodging (-27.2%) and retail (-28.3%).1 This report will explore the dynamics propelling the sector to unparalleled success.

1 Prior to the pandemic, the data center market was projected to grow at a healthy rate on account of the increasing use of smart technology and digital commerce. Retail e-commerce grew 72.6% between 2015 and 2019, while online grocery sales increased 117% in that same time. From smart cars, televisions, thermostats, laptops, tablets, homes, and phones, the use of smart devices - called the Internet of Things (IoT) - was accelerating at such a rate that the International Data Corporation recently estimated that by 2025 there would be 41.6 billion IoT devices. That is roughly a 500% increase from today’s 7 billion devices–connected to the internet generating 79.4 zettabytes of data.2

2 With the advent of the pandemic, however, all the pre-existing trends in the sector’s favor have only accelerated. Millions of people are working from home, attending online schooling, shopping online, and gaming. The Internet and Television Association found that peak downstream internet usage increased by a cumulative 30% since March of 2020. Peak upstream internet usage increased by 51.2%3, and between March and August 2020 online sales exceeded $2 billion per day for 130 days.4  In 2019, excluding the holiday season, there were only two days that saw that volume.5  Video meetings necessitated by remote working exploded Zoom Video Communications growth, jumping from 10 million daily zoom meetings in December 2019 to more than 300 million daily meetings in April 2020. That translates to an increase from 100 billion meeting minutes in January to two trillion meeting minutes in April, an increase of 1,900%. According to a recent report, the pandemic will drive a 64.3% increase in demand for internet telehealth services.6

This sudden explosion of digital demand affects every aspect of data centers’ operation. The demand for more data centers and the resources to operate them is rapidly accelerating as data consumption grows. Datacenter Hawk reports that in the first half of 2020, the top 15 data centers in America added 423 megawatts of commissioned power, 2.4% more than were added in all of 2019.7

3 Naturally, all of this activity has piqued the interest of investors. According to Synergy Research, as demand has increased, so has global M&A activity in the data center sector, which surpassed $30 billion as of November 2020. Digital Realty’s acquisition of Interxion at $8.4 billion was one of the largest deals in 2020.

In general, investment activity has grown on several fronts. Investment has increased, for instance, on a speculative basis where cloud demand has been most robust, in secondary markets where cloud demand has increased, and even in new international markets. As existing players continue to roll out funds and new entrants seek entry into the space, institutional equity interest is at its apogee. For example, in November 2020 funds affiliated with Blackstone Real Estate formed joint ventures with Corporate Office Properties Trust to acquire interests in eight single-tenant, data center shell properties. The latest in several deals between COPT and Blackstone.

Blackstone is merely one of many entrants to the sector. Goldman Sachs, in partnership with Digital Realty co-founder Scott Peterson, committed to fund up to $500 million “of equity capital, primarily from its infrastructure fund, to enable approximately $1.5 billion in near-term investments deployed across North America, Europe, Asia Pacific, and Latin America.”9 READ MORE > 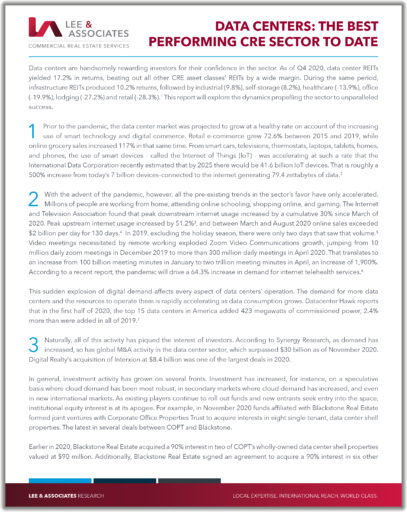