In its “American Family Plan,” the Biden administration proposes to nearly double the capital gains tax for people who make more than $1 million a year. The plan will tax capital gains at the same rate wages and salaries are taxed and raise the top marginal income tax rate from 37% to 39.6% for households making $400,000 or more in income. If passed, these taxes will have significant ramifications on the US economy in general and on commercial real estate in particular. This report will examine the tax implications of various aspects of the “American Family Plan.”

Currently, the top tax rate on capital gains, which applies to higher-income earners, is 20%. President Biden would increase the capital gains rate for those with incomes of over $1 million per year to the top rate on ordinary income, which under his plan would increase to 39.6%. If you include the current 3.8% net investment income tax that is imposed on those earning more than $200,000 annually ($250,000 for married couples), then the increase would be from 23.8% to 43.4%, an almost doubling of the capital gains tax rate for high-income investors.

For historical perspective, when the modern income tax was created in 1913, capital gains were taxed at the same rates as ordinary income — as high as 77% in 1918--the year World War I ended.

After the war, Congress lowered the top individual tax rate to 58% in 1922 and split off capital gains from regular income, slashing the rate to 12.5%.

The top marginal tax rate on capital gains has historically been much lower than that for ordinary income, although the gap has narrowed as overall tax rates have come down. The Biden administration’s proposal would eliminate the gap entirely.2

In private equity investments, carried interest is the fund manager’s share of the profits when the profits are realized, and it amounts to the bulk of a fund managers’ compensation. It is designed to align the manager’s interests with the investor’s and to incentivize performance.

Under the current tax code, carried interest is considered a return on investment, so it is taxed at the 20% capital gains rate rather than the 37% regular income tax rate, for those who make over $1 million.

Biden’s proposal would tax them as ordinary income, effectively raising rates on many real estate entrepreneurs from 20% to 39.6% for those earning more than $1 million. READ MORE > 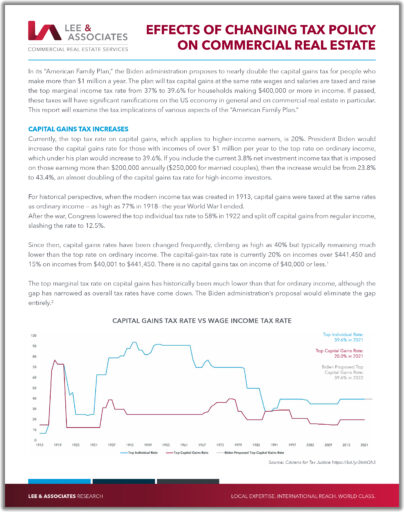