Fitness Tenants in the Era of COVID-19

Before the pandemic, the fitness industry was booming. They were one of the best tenants for retail centers and were among the top five retailer users in Southern California.[1] In 2018, the U.S. health club industry revenue totaled $32.3 billion, and more than 71.5 million U.S. consumers used health clubs, an all-time high.[2] The number of fitness centers in the U.S. increased by 24 percent since 2010 to 111,055 locations, and the figure was expected to rise to nearly 121,000 locations by 2024.[3]

However, with the advent of social distancing and shelter in place orders, gyms, along with theatres and restaurants, have been among the hardest-hit retailers seeking rent relief from landlords.[4] This has caused many to wonder about the fitness industry’s long-term viability and what bearing the industry might have on commercial real estate going forward. This report will explain the fitness industry’s status prior to the pandemic, how the industry has reacted to the new reality created by COVID-19, and its future prospects as a commercial real estate tenant.

Before the COVID-19 pandemic hit the U.S., fitness-related tenants were all the rage among the landlords across the country. In 2018, the number of health club users reached an all-time high of 71.5 million, and revenues for the health club industry exceeded $32.3 billion. Landlords loved them as tenants.  Not only did these businesses not have to take years of expensive construction to open up, but they brought people to shopping centers. Other tenants liked having the spill-over business from sizeable big box gyms and smaller boutique fitness studios. READ MORE >

HOW HAVE FITNESS TENANTS DEALT WITH THE NEW REALITY CREATED BY COVID-19?

Unfortunately, with the advent of social distancing and shelter in place orders, the fitness and health club industry has been one of the hardest hit among retail tenants. Governmental mandates have pushed some large gym chains to rapidly shrink their footprints and refocus on apps for at-home workouts, while many smaller studios have gone out of business.

Multiple lines of evidence suggest that claims about the “death of fitness” are overstated.

For instance, Gold’s and 24 Hour’s bankruptcies are not representative of the industry as a whole. Even before the pandemic, it was an open secret that these two companies had severe debt problems.[6] Thus, the sudden stoppage of revenue they experienced due to the mandated closures did not create their financial crisis as much as exacerbate preexisting debt-equity issues they already had.

Likewise, even with health club chains filing bankruptcy, there haven’t been any major permanent closures of big box gyms or boutique fitness centers.[7] For the most part, landlords and tenants have been working together to achieve mutually satisfactory solutions. The fact that landlords are willing to work with these businesses and keep them up, shows that they believe there will be value in them in the future.

Moreover, the consensus among industry analysts is that if gym owners are able to weather the storm a little longer, they’ll be the traffic drivers they once were.[8] Just looking at the recent month gyms were allowed to reopen in Arizona, a state with a strict closure mandate, foot traffic numbers were considerably up. In June, the national gym chain Anytime Fitness saw only 25% fewer customers at its Phoenix locations compared to February 2020.  Whereas in April, during the height of the stay at home mandates, those numbers were down 64%, according to data from Gravy Analytics. CrossFit, Planet Fitness, and LA Fitness saw similar trends, per Gravy Analytics’ location tracking database.[9] READ MORE > 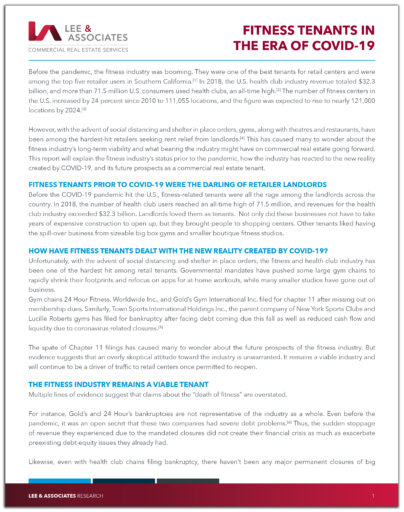