Multifamily Development Is Flourishing as Never Before

When the pandemic engulfed the world last year, few analysts predicted that the multifamily sector would flourish and thrive so well. Most suspected that the sector would be on life support. Yet, despite a yearlong national eviction moratorium, there hasn’t been a better time to be a big apartment-building landlord. Multifamily-property values have increased 13% since before the pandemic and more money is being invested now in apartment buildings than in any other type of commercial real estate. How did this happen and what explains this? This report will explain why the multifamily sector, contrary to past predictions and present-day misperceptions, is flourishing as never before.

1 Measured on an annual basis, national asking rents rose 10.3% in August. That marked the first double-digit increase in the more than 20 years the data of 13 million professionally managed apartments has been collected, and in several cities, the rent increases were much more significant than the national figure.1 August rents rose more than 20% year-over-year in Phoenix, Las Vegas, and Tampa. Similarly, monthly rents were up more than 20% in comparable markets such as Boise, Idaho, and Naples, Florida.

2 Multiple factors explain this rise in rents. Younger adults who lived with family last year are now renting their own apartments, and middle-income workers who have been priced out of the housing market have few options. If they want to live in an apartment, they must pay higher rents. Moreover, demand for new apartments is outstripping the capabilities of developers to supply them.

3 Apartment occupancy rates hit a record high of 97.1% in August. This is a critical metric landlords use to determine how much they can increase rent. As the occupancy increases, the greater the capability of landlords to increase rents. Additionally, household incomes for new renters at professionally managed properties also reached a new high of more than $70,000 a year.2 This further strengthens the leverage landlords have over renters. 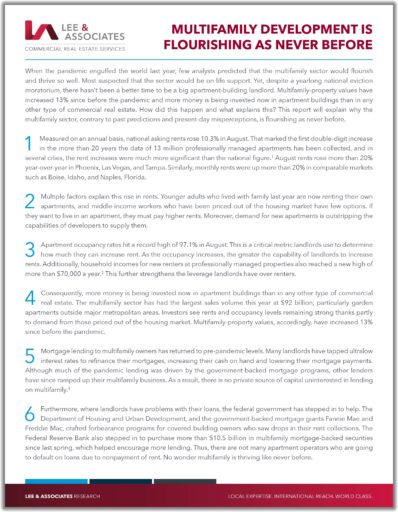 4 Consequently, more money is being invested now in apartment buildings than in any other type of commercial real estate. The multifamily sector has had the largest sales volume this year at $92 billion, particularly garden apartments outside major metropolitan areas. Investors see rents and occupancy levels remaining strong thanks partly to demand from those priced out of the housing market. Multifamily-property values, accordingly, have increased 13% since before the pandemic.

5 Mortgage lending to multifamily owners has returned to pre-pandemic levels. Many landlords have tapped ultralow interest rates to refinance their mortgages, increasing their cash on hand and lowering their mortgage payments. Although much of the pandemic lending was driven by the government-backed mortgage programs, other lenders have since ramped up their multifamily business. As a result, there are a large number of private sources of capital interested in lending on multifamily.3

6 Furthermore, where landlords have problems with their loans, the federal government has stepped in to help. The Department of Housing and Urban Development, and the government-backed mortgage giants Fannie Mae and Freddie Mac, crafted forbearance programs for covered building owners who saw drops in their rent collections. The Federal Reserve Bank also stepped in to purchase more than $10.5 billion in multifamily mortgage-backed securities since last spring, which helped encourage more lending. Thus, there are not many apartment operators who are going to default on loans due to nonpayment of rent. No wonder multifamily is thriving like never before.