Office Sector: Adapting to Change and Preparing for Success

COVID-19 has fundamentally changed the way employees work and the way businesses operate. The pandemic fueled the need for the continued transformation of office space to better support social distancing, provide cleaner and more efficient workplace environments, and offer work from home opportunities. From these patently correct observations about the office sector, many infer that the sector is in a state of decline and descent. However, what we are witnessing is not the end of the office sector but its transformation. This report will analyze and explain office sector trends which bolster this conclusion.

1 It is understandable why many have thought that the office sector is in a state of decline. It can’t be denied that leasing and transaction volume has significantly declined while vacancy rates rose and sublet availability rates increased to record levels across all major markets in the US.1

Importantly, however, and this point can’t be underscored enough: while space use and occupancy rates were low throughout 2020, rent collection rates have stabilized to pre-pandemic levels.2 Thus, while tenants may not physically occupy the space they are leasing, they are profitable and capable enough to pay the rent. Therefore, it is a fundamental error to view office real estate as a dead, non-income generating investment vehicle. Just because the sector doesn’t look the way it used to, don’t think it’s not alive.

2 Investors are growing more bullish about the sector. Sales volume increased every quarter since mid-year 2020 as investors increasingly adapted themselves to the new environment.  While not on par with prior year-end totals, Q4 investment sales levels doubled from what we saw in mid-year. The willingness of capital to come off the sidelines stemmed from the announcement of plans for large-scale vaccine distribution. Investment volume in the top 15 office markets saw their levels either match or exceed their 2-year average. Thus, not only did tech hubs like San Francisco and Seattle end the year on a positive note, but so did sunbelt cities like Dallas, Phoenix, and Raleigh.3

Moreover, when you look at the deals of $100M+ done in Q4, an important pattern emerges. Investors were looking for high-caliber trophy buildings with strong credit tenants with long-term leases, and all those deals were trading at pre-pandemic prices. Unlike what we witnessed after the financial crisis during 2009, there was no fire sale of distressed office assets. Pricing for these assets has been remarkably stable. As a result of stable rent collections, owners are well-capitalized, and lenders remain well-capitalized as well. Thus, rather than feeling the need to slash their office assets’ values to sell them, owners and lenders have taken advantage of historically low-interest rates to refinance them. Furthermore, owners and landlords of office buildings are not reducing asking lease rents. Instead, they are providing increased Tis and rent abatement and thus not taking out further debt.

3 Another misperception is that employee preferences have changed such that offices will go 100% remote and thus eliminate the need for office space. However, almost all employee and employer surveys conducted throughout 2020 indicate that very few companies will go 100% remote.4 While an increased component of work will be conducted via home office, it will not be entirely remote because of the following reasons:

4 Before the pandemic, FANG Companies (Facebook, Amazon, Netflix, and Alphabet, aka Google) were dominating the commercial real estate market. That trend only continued apace even in 2020. If their behavior is any indication of the office sector’s future, then the sector will certainly thrive. Even as they have certainly increased their remote work component, they have not contracted the amount of office space they are leasing. READ MORE > 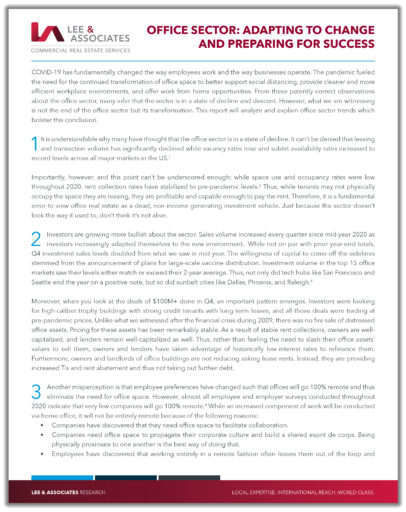