With interest rates at extremely lows levels and fears of rising inflation heating up, investors have flocked to real estate investment trusts (REITs) as an investment vehicle. Is it wise to do so, what is propelling this move, and what kind of performance should investors expect? This report will explain why there is a surge in demand for REITs and analyze how they are currently performing and how they have performed historically.

1 REITs are often regarded as a substitute for bonds. As a class, they are up nearly 30% this year thus far. It’s not surprising then that as of September 13th, REITs have attracted $10 billion in new money, according to FactSet—nearly as much as they took in over the preceding five years combined.

2 REITs own, operate, or finance income-generating commercial or residential properties. More than 100 mutual funds, closed-end funds, and exchange-traded funds invest primarily in REITs. According to Morningstar, together, they manage more than $224 billion. For reference, equity REITs own real estate while mortgage REITs lend against it.

3 Without question, 2020 was a challenging year for the industry. The FTSE Nareit All Equity REITs index fell 5.1% last year, including dividends. That was its worst return since 2008 when the index lost 37.7%. In March 2020 alone, REITs specializing in apartments lost 22.6%; hotels and resorts, 36.6%; retailing, 42.7%; regional malls, 54%. Furthermore, more than one-third of U.S. equity REITs have suspended or reduced their dividends since COVID-19 hit, according to Cohen & Steers Inc., an investment firm in New York that manages approximately $100 billion, mostly in real estate.1

4 Even though their dividends yields have fallen, returns on investment have exploded due to price appreciation. According to REIT.com, as of September 15, nearly two dozen REITs had total returns of greater than 100% over the past 12 months. Leading ETFs, including iShares U.S. Real Estate and Vanguard Real Estate, are up 27% to 29% so far this year, including reinvested dividends, well ahead of the S&P 500’s 20%.

5 Although no analyst expects these kinds of large returns to go on indefinitely, there is very good reason to believe in REITs’ long-term performance, especially when compared to private equity real estate funds (PERE).

According to findings in a recent research report comparing the performance of REITs and Open-End Core Funds, listed REITs outperformed closed-end PERE funds both on average and by the percentage of individual funds that outperformed. The analysis looked at performance data over a 20-year period (Q1-2000 thru Q4-2019) for both “seasoned” PERE funds, i.e., funds at least four years and older, and also “economic” funds, those with a vintage year of 2014 or earlier and reporting a stable IRR. Based on IRR, listed REITs outperformed seasoned PERE funds by an average of 165 basis points per year and outperformed economic life funds by 186 basis points per year.2

6 Although the analysis shows that listed REITs do outperform PERE funds, it is important to note that a comparison of the median performance offers a slightly different result. REITs still performed better than economic private equity funds, but by a somewhat narrower margin of 167 basis points. However, seasoned funds outperformed equity REITs by a slim 13 basis points on annual IRR. Nonetheless, it is the case that closed-end PERE funds underperformed listed REITs – both on average and by the percentages of individuals funds. As the authors of the study conclude, “Overall, we find that close-end PERE funds have underperformed listed REITS, even before adjusting for risk, leverage, illiquidity, and the uncertain investment timing associated with unfunded capital commitments.” 3

7 As one of the lifelong cornerstones of a diversified portfolio, investing in real estate makes sense. Moreover, as the foregoing analysis clarifies, one of the best performing investing vehicles over the long run are REITs. 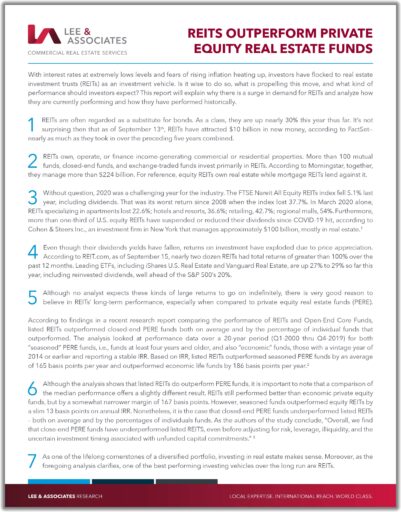