Evidence of the supply chain crisis we are facing is hard to miss. Right now, off the coast of Los Angeles, over 80 large container ships are sitting idle waiting to dock and offload their cargo. The ramifications of this and other bottlenecks in our global supply chain system have caused a backlog of nearly $3 billion in goods that have been ordered but not yet shipped, according to U.S. Census data.1 What caused this to happen, what happens next, and when will it be over? This report will answer these questions and explain the causes behind our current predicament.

WHAT CAUSED THE CURRENT SUPPLY-CHAIN BACKLOG?
The crisis began when the pandemic led to temporary plant closures to contain the outbreak, workers calling out sick, and international borders being closed. Many companies assumed consumers wouldn’t want to spend money during a crisis, so they scaled down production and furloughed and laid-off employees. They were wrong. Flush with stimulus checks and all the money they saved from not going out or on vacations, Americans stuck at home decided to commence home improvement projects. They purchased new appliances, embarked on remodeling projects, and purchased 60-inch televisions they’d always wanted. Instead of falling, demand soared.

Factories ramped back up as quickly as possible, but doing so hasn’t been a quick or straightforward process. Not all COVID-19 restrictions have been lifted, and not all workers have returned to their previous jobs. Consequently, even though companies have tried to meet the increased demand from consumers, they haven’t been able to do so. Moreover, not only were companies unable to keep up with demand, what they had manufactured, they could not ship to retailers because a shipping container shortage impacted Asia. The containers piled up in parts of the world that needed goods from China, such as protective gear needed in West Africa, but didn’t produce many goods that could be shipped back. Suddenly the cost to move goods exploded, becoming about ten times more expensive than pre-pandemic. Those costs, plus tariffs on the goods, are passed on to consumers. Adding to the backlog, the Suez Canal was shut down for nearly a week in March after a ship became stuck in the waterway. Add to this, a pervasive shortage of workers unloading goods at ports and drivers getting them to their destinations is further compounding the situation.2 READ MORE >

WHAT HAPPENS NEXT IN THE IMMEDIATE NEAR-TERM?
If retailers are able to get goods onto shelves, the next challenge is getting e-commerce orders delivered to consumers. Carol Tomé, the CEO of UPS, has said orders will outstrip delivery capacity by about 5 million packages a day this year.

UPS, FedEx, and DHL are already planning for a frantic holiday season without enough workers by substantially increasing fees, giving raises, and buying robots. The gaps the traditional players can’t fill, alternative package-delivery companies like LaserShip and OnTrac are looking to capitalize by merging their resources as one entity to compete against UPS and Fedex. Combined, the companies will be the country’s largest regional parcel carrier, stretching from the Atlantic to Arkansas and from the Pacific to Colorado.4 READ MORE >

WHEN WILL THE SUPPLY CHAIN ISSUES END?
Unfortunately, the supply chain issues will not end anytime soon. Most economists and supply chain analysts expect the current bottlenecks and backlogs to continue until 2023.5

The problem is that the crisis doesn’t have easy solutions. Even if the ports in Los Angeles and Long Beach clear up, there still won’t be enough trucks on the road, workers in warehouses, or delivery vans out on the streets. Moreover, COVID-19 could continue to cause shutdowns and delays. However, there are three things specialists in logistics are looking at to know when the supply-chain crisis will ease and possibly end: READ MORE > 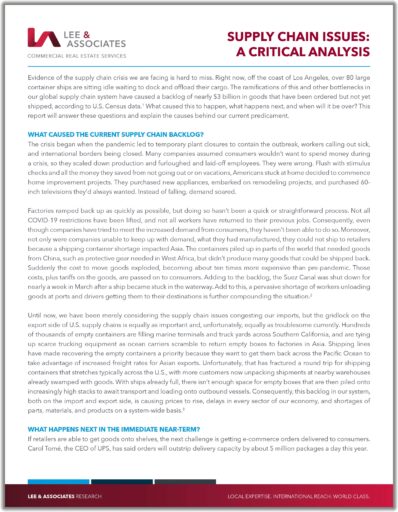