The Impact of Legislation on the Multifamily Sector

Beginning when the first shelter in place orders were implemented in March of this year, Congress, the Parliament of Canada, and multiple state and provincial legislatures enacted various legislative acts to mitigate the ill-effects of the lockdown. These pieces of legislation bear directly on the multifamily sector.

With the protection of renters chief in mind, these legislative acts’ primary purpose has been to shield lessees from evictions. On a secondary basis, these legislative measures have sought to offer mortgage protection to lessors, and through the Fed, loan default protection to banks and other lending institutions. However, most of this legislation, such as the USA CARES act, expired at the start of August.

Where does that leave lessees, lessors, and lending institutions now? What is their standing? Do they or do they not have any legal protections currently? This report will explore these questions and explain how Canadian and American public policy, agency law, ballot measures, and federal and state legislation have all impinged upon the multifamily sector to date.

1 The CARES Act, which was enacted when the stay in place orders commenced in March, implemented a federal ban on evictions. However, it expired at the beginning of August and is now defunct.

2 Although the Cares Act expired, a new national eviction moratorium is in effect as of September 1, 2020 and will last until December 31, 2020. However, the new moratorium order didn’t come from Congress. Instead, it was issued by the Centers for Disease Control and Prevention, using authority granted to the federal government in a 1944 public health law. The stated purpose of the order is to keep people out of homeless shelters or other crowded living conditions that could worsen the spread of COVID-19. 1

3 The CDC ordered eviction moratorium offers broader protections than the CARES Act.  The CARES Act only covered certain types of properties, the new moratorium protects everyone living in one of the nation’s 43 million rental households, regardless of where they reside.

4 The CDC’s new order halts evictions across the US for anyone who has lost income due to the coronavirus pandemic and has fallen behind on rent. Unlike the law governing the province of Ontario, it doesn’t prohibit late fees, nor does it let tenants off the hook for back rent they owe. It also doesn’t establish any kind of monetary fund to help renters get caught up - a safeguard some have said is critical to preventing a massive wave of evictions when the ban lifts.

The order only halts evictions for not paying rent and only those renters earning less than $99,000 per year ($198,000 for joint filers). Lease violations for other infractions - criminal conduct, becoming a nuisance, etc. - are still enforceable evictions. Finally, renters must print and sign an affidavit declaring their eligibility for protection. READ MORE >

9 Unlike provinces such as Manitoba, Quebec, and Saskatchewan5 Per the Canada Mortgage and Housing Corporation, the eviction bans ended for Manitoba on September 30th, for Quebec on July 20th, and for Saskatchewan on August 7th of this year. The provincial governments of British Columbia and Ontario have not ended their eviction bans. For reference, the major cities governed by the provincial legislatures of British Columbia and Ontario are Vancouver and Ontario, respectively.

10 To date, in British Columbia, the following protections are in place for residential and mobile homes site tenants facing financial hardship due to COVID-19. Tenants are still expected to pay rent in full and on-time if possible.

For those who are having difficulty covering rent, there is an option to apply for a temporary rent supplement of $500. This assistance is only available to low income and moderate-income households. 6 READ MORE > 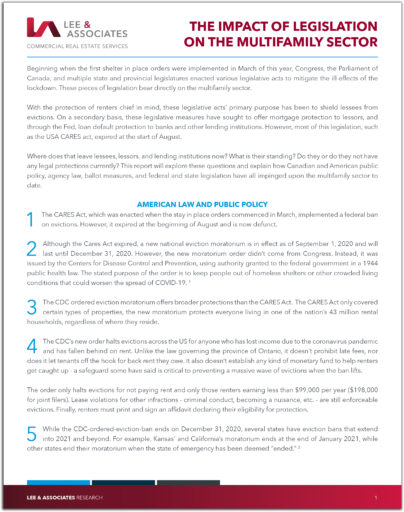